Hi, I am using a V2 Raspberry Pi IMX219 camera on my Jetson Nano, and it does not recognize the camera. When I run the command “gst-launch-1.0 nvarguscamerasrc ! nvoverlaysink”, it puts out the error message I have attached, saying “557 No cameras available”. When I try to find dev/video0 in my filesystem, it is not there. This camera should be able to work out of the box with no drivers, and it has a ribbon connector rather than a USB. Can anyone point me in the right direction as to how to fix this? Thanks. 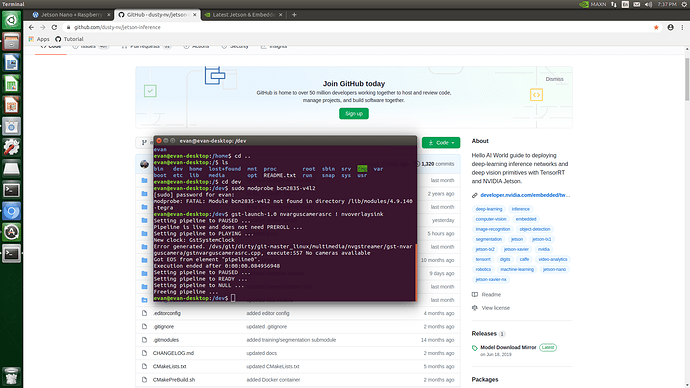 IF you use Jetson Nano Devkit, I recommend, you’d make sure FFC is installed with correct side.
As you said, RPi V2 camera should be detected and shown /dev/video0, then run without any effort.

I’ve made sure that the FFC is installed facing the correct side, and that it is properly locked into place. I am using Jetson Nano devkit, yes. It should be detected and showing in /dev/video0, but it isn’t. Any other tips on what might be going on to cause that?

I’ve already done the second one - this is actually the second camera I’m testing for it, the first one displayed the exact same error. I’d rather not have to buy a whole new board, but will do that if I have to. Can you elaborate a bit on related kernel errors? I’m not sure quite what you mean by that. Thanks for the response, by the way!

Ok, I ran dmesg, and it produced the following klog.txt. What should I be looking for in it? The only line that looks relevant to me is “tegra_camera_platform tegra-camera-platform: tegra_camera_probe:camera_platform_driver probe”.

may I know which sensor vendor you’d contact with for buying.
please ask them to confirm the workable JetPack release version.
thanks

Do you have clean L4T image on your devkit?

JerryChang: Good to know. Might the board setup errors be an issue with the board itself, rather than the camera? As I said, I have tried two cameras now, both of which should be able to work out of the box on Jetson Nano, to no success. The one I am currently trying is made by Raspberry Pi; I can’t find any documentation online for what JetPack release version it is compatible with. This is the link:

and here is the link for the first camera I tried, that also doesn’t work:

As an update/solution: I am now able to use the camera. I followed the advice in the thread linked below; it turns out the camera needed to be connected before the board started up, and I was starting the board up first, then connecting the camera. That thread with the solution hadn’t come up in a google search presumably because it included the dmesg log results, which I hadn’t run and wasn’t searching for at first. Leaving this here in case anyone else encounters the same issue again.