I’m not a developer, but I’m reasonably familiar with Linux, primarily the Ubuntu family, which brings me directly to the point.

I use Linux Mint 19 x64 installed on an Alienware 15 R3 with the following specs:

LM19, by default, offers the 390.116 version of the Nvidia GTX drivers, and that’s Ubuntu’s stable release. I’d like to upgrade to the latest stable release for my system, 418.56. While the 390.116 drivers work fine, I’m a gamer, and would prefer to be as current as possible.

Can anyone point me to a guide or possibly jot down some notes regarding the upgrade process so I can avoid any pitfalls. I’d also like to know if there’s an automated process for keeping the drivers up-to-date.

Thanks. Your answer wasn’t complete, but it was more than enough to figure it all out rather quickly, and that makes me happy. I’m now running on 418.56 and have the ability to switch GPUs, though I haven’t figured out Bumblebee yet, and you have to log out and back in to switch without it, which is… cumbersome.

Once the update to the repo completes, you will find a load of different driver versions. However, when I installed using :

it installed the full range of available drivers, as you can see below. 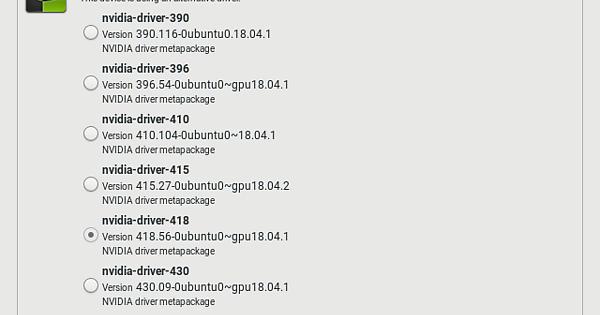 At the very least, if there are any problems at least I can switch to an installed and known working driver through the terminal.

Thanks for the help!!