After installing the latest CUDA SDK, Visual Studio 2022 shows the NSight menu, but “Start CUDA debugging” is locked, as well as all the other NSight buttons. 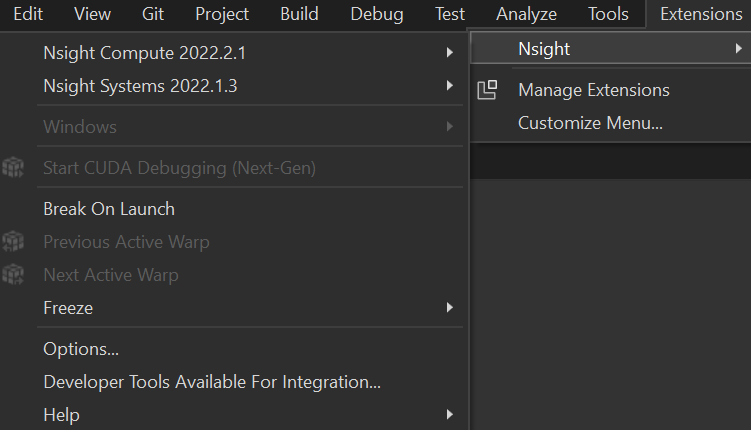 Also, I can see that unlike Visual Studio 2019, my instance of Visual Studio 2022 does not automatically start Nsight Monitor, although the default settings are correct (Auto Launch Monitor on localhost = True).

I have a CMake project in Visual Studio and both the CMake configuration, building/rebuilding the project and running it works just fine (i.e. CUDA works).

What I tried to solve this

I tried the following actions and it did not help to solve the problem:

2 things that we can look at here. First, you mentioned the Nsight Monitor, are you using the legacy debugger rather than the next-gen debugger? Note that the next-gen debugger does not use the Nsight Monitor. If you are using the legacy debugger, it is not supported in Visual Studio 2022 but it is still supported in Visual Studio 2019, you can use it there.

Elton, thank you so much for your response.

I did not know that Nsight Monitor is not needed for the next-gen debugger. I am sorry if I have missed that in the official documentation, could you please refer me to the respective section in the documentation?

I am totally fine to use the next-gen debugger, but unfortunately it does not work, as described in my original post.

Maybe I am doing something wrong with the installation? How a fresh, “from zero” installation shall be done?
Install Visual Studio 2022 and then install CUDA SDK with “Visual Studio Integration” and “Nsight VSE” included? 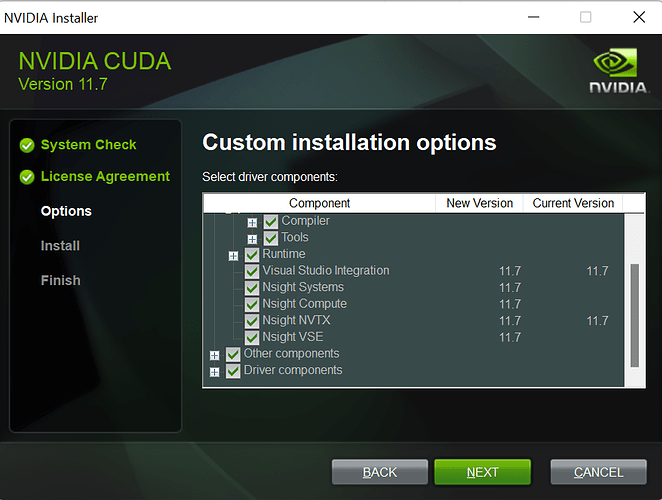 If those gets installed, I don’t understand why one shall install NVIDIA Nsight Integration (64-bit) extension inside Visual Studio 2022.

To be honest, I don’t understand if the “NVIDIA Nsight Visual Studio Edition 2022.2.1.22136” comes from the CUDA SDK installation or from a Visual Studio extension:

Regarding CMake, I open it with “Open Folder”. Usually it gets added to my recently used projects. If I click “Project > Delete cache and reconfigure”, I get a successful run of CMake for this very CUDA project:

A couple of more updates:

Thanks for keeping on top of this. I filed a bug with our engineering team and hopefully we hear back soon.

Thank you very much for filing a bug with the engineering team.

To me it seems that most probably it has something to do with CMake in Visual Studio.

All CUDA debugging buttons are still greyed out (disabled).

@Elton, @jmarusarz maybe you could recommend trying some other fixes while we are waiting for the updates from the engineering team?

The command moving to under Extensions is Visual Studio behavior that I believe was introduced in Visual Studio 2019. You can move it back to the main menu by:

Ok, I have tried to open the compiled .exe.

When I open it as a solution in Visual Studio, as per @Elton’s recommendation, “Start CUDA Debugging (Next-Gen)” becomes enabled.

Which means that probably the original problem is due to some bug of the NSight Visual Studio Edition extension which for some reason does not work with a CMake-based project.

Nevertheless, after opening the .exe file and adding the source code, I cannot debug it as the breakpoints do not work:

Just to double-check, is the .exe built to generate debug symbols?

Yes, the .exe is built with debug symbols, there is a .pdb file generated along with the .exe file.

Here is the relevant CMake configuration:

I can see that breakpoints don’t get hit (i.e. they don’t work) in .cu files, but they do work in .cpp files.

An addition to the previous post (using an .exe as a workaround to enable CUDA debugging):

Some breakpoints in CUDA code are just not being hit, but there are no warnings about that. They get skipped silently.

Some other breakpoints in the same CUDA code, but in another file, get a warning “The breakpoint will not currently be hit. No executable code of the debugger’s target code type is associated with this line…”

Also, I have run exactly the same CMake project with remote VSCode debugging and it works, all breakpoints (host/device) get hit.

Which means that the problem is somewhere in the Nsight plugin for Visual Studio.

@Elton @jmarusarz I would like to report additional info to the originally reported bug:

When creating a completely new CMake project in Visual Studio with a wizard, the Start CUDA Debugging button is disabled and does not work:

If instead we choose to create a Console App that is based on .sln and .vcxproj files, the Start CUDA Debugging button is enabled and is active.

I just confirmed the same error (a disabled Start CUDA Debugging button) in Visual Studio 2019 (16.11.19) for a CMake project.

If instead we choose to create a Console App that is based on .sln and .vcxproj files, the Start CUDA Debugging button is enabled and is active.

Can you describe which command you are using to open the CMake project (eg, “Open Folder”)?

The following actions produce the same effect, which is the error of the disabled Start CUDA Debugging button:

May I ask if there has been any progress on this bug?