I ran the windows 10 update and it was up to date. So l don’t know if there is any other windows 10 version that has been released.

What is the version of Windows you’re using? You can check it out using Win+R and typing “winver” there.
Would it be possible for you to attach a screenshot of how the notification looks like for Omniverse Drive and Nucleus Cache?

the images here are the screenshoots as requested. the image is for the notification. 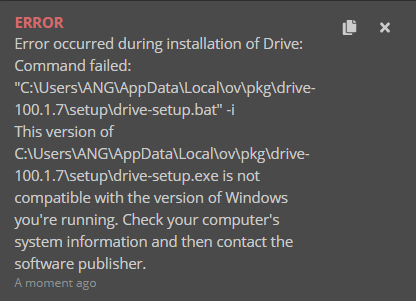 Thank you for the information regarding the version of your Windows OS. That is indeed the latest version available of Windows 10 thus far. (Microsoft has not released any 22Hx versions this year.)

I was able to stand up a brand new VM running the same version of Windows 10 that you are running and was able to install Nucleus, Cache, and Drive without issue.

Can you tell us a bit more about your computer? Any applications running in a lower compatibility mode or AntiVirus software you may be running?

Nothing particular unless you ask me the details you want. However I do have Avast anti-virus software installed on the laptop.

Applications running in lower compatibility, there is none l can think of.

Hello @ssewajjeangello! I run Avast on one of my computers and I do not have any issues with Omniverse. Could you attach your logs from the Launcher, usually found here: C:\Users\<USERNAME>\.nvidia-omniverse\logs\launcher

Also, this information may help point us in the right direction:

Hello,
I am going to attach files on background apps and omniverse log information.
Am using a Nvidia GPU driver version 342.01
Omniverse log information.txt (392.6 KB)
Unfortunately since am a new user l can only provide one link. But the background apps that are running on my laptop are the default apps with also windows security. They are 28 in total.