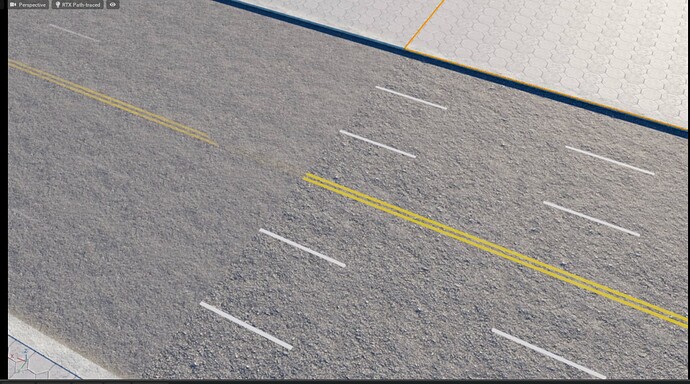 Screen Shot 2022-05-13 at 3.51.17 PM1920×1071 245 KB
The same material looks different on 2 objects–the 2 objects which have the same scales. They were originally built in the same dimension. I checked the Material-UV-texture scale, it’s both the same number. I tried to give them the same material in the same scene and in the same way. the annoying glitching effect is still there. and the yellow-double-lines have different apparences too. Does anyone have the same issue?
Doing operation with Xform doesn't have any effect on X-forms and objects under that X-form
user79641 May 13, 2022, 8:10am #2

How about duplicating the right mesh and use it?

Duplicating the very part of it in the original scene helps avoid the glitching effect. Unfortunately, It wasn’t an option for me. Because the idea is to create the modules of the scene and combine those modules together so we can get a variety of scenes according to our needs. Eg. the picture is the merging of a crossroad and a straight road. I couldn’t use the copy of another one because the geometry was different. To make it clearer, First, modularity is important for my workflow cause I will need a whole bunch of scenes later. Second, the appearance of the road is important cause we will need these scenes to generate images for machine learning.

Say that’s the issue, does Ov provide any posibilities that allows users to view and edit UVs?

I don’t think there is (or I don’t know). Though the street surface can be made procedural to use object space instead of UV. Then those lines can be placed upon the street as decals.

Hello @yuanmiaomiao1994! Would you be able to give us your source file so that we can take a look on our end? You can attach your file here or you can log into the customer portal here: Omniverse Customer Portal and create an issue there.